1,616 km north-west of the City of Buenos Aires, and 1,200 km north of Mendoza, is the Province of Salta. Its vast area of 155,488 km2 (4,1% of the total in the country) displays a diverse array of landscapes: arid desert on the West, exuberant green rainforest on the East, valleys and gullies in the centre of the Province.

Salta is bordered by Chile, Bolivia and Paraguay at the north-west, also by six of the northern Argentine provinces at the south-east: Jujuy, Formosa, Chaco, Santiago del Estero, Tucumán and Catamarca. Due to its optimum location, great air terrestrial accessibility, the quality and diversity of services offered, this province is considered to be the centre of the region.

Cafayate is 180km south of Salta, and it is the winemaking heart of the Calchaquí Valleys. There are 2,600 vine growing hectares –approximately 2% of the national area- between 1,700 and 3,200 m above sea level, which makes it one of the hihgest, most exclusive in the world.

Domingo Molina Winery is 8 km west of Cafayate, in Yacochuya, at 2,000 m above sea level, on the Andean mountainside, from which the Calchaquí Valley can be seen. 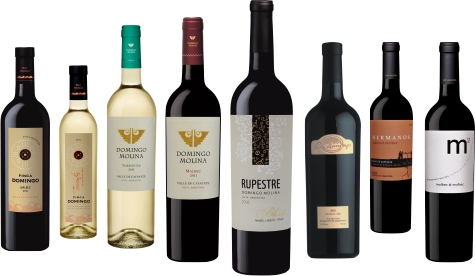